Orchestrating Networks with Faucet and SLATE

Software Defined Networking (SDN) is an emerging technology that allows network administrators to programmatically manage network devices in a dynamic and cloud-like manner. Faucet is an SDN controller that utilizes the OpenFlow protocol to enable managing devices in such a way. We have been working on packaging Faucet as a SLATE application to empower sites to experiment with this exciting new technology. In this post, we’ll explain the process of configuring, deploying and connecting a Faucet controller through the SLATE platform.

Faucet allows the user to define a set of rules that outline the structure and flow of a given network by giving OpenFlow commands to compatible switches and routers that control that network, as seen in the figure below. Some of this functionality can control throughput for specific VLANS, isolate portions of, and quickly add new segments to, the network. These changes can be made largely on the fly to allow for an easily set up and adjustable networks. Faucet also uses the OpenFlow protocol, which allows for the use of virtual switches, a more cost effective and in some cases more powerful networking solution than their physical counterparts. 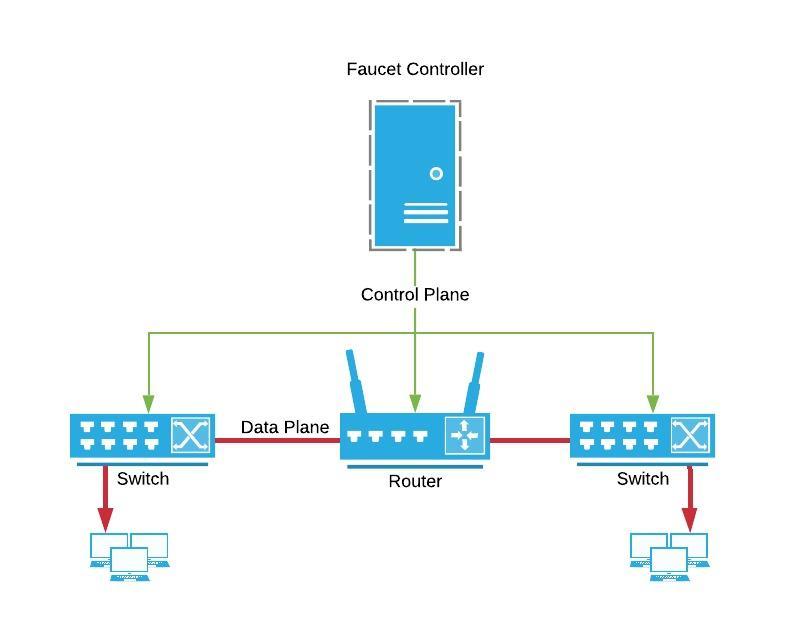 To accomplish all of this functionality, Faucet relies on a set of YAML files to define the network characteristics. The Faucet documentation includes tutorials that explain how to make these yaml files. If you were using Faucet without SLATE you would compose these .yaml files using a text editor, then feed them in as part of the installation. The process for deploying Faucet through SLATE is somewhat different.

To set a concrete example of how one might deploy and use Faucet through SLATE, we are going to walk through the process to qualify that Faucet was actually functioning. We used a GENI topology that hosted a simple network with three virtual machines connected by a single switch at the University of Texas. The switch pointed to a Faucet instance running on a MiniSLATE cluster on a seperate machine set up at the University of Michigan.

First, we set up a single VM on an InstaGeni resource at the University of Michigan which had 2 cores, 4 gigabytes of RAM, and 20 gigabytes of disk space. On the VM, we installed MiniSLATE in the usual way.

With this environment set up, we access the SLATE shell:

We can issue the usual SLATE command for fetching the Faucet configuration:

Once the configuration is in hand, we can go in and edit this file to replace the default Faucet YAML configuration with the configuration needed for our specific network. After the approprate modifications were made, we then deployed Faucet using the following command:

After deploying the SLATE Faucet application, we needed to build the actual network topology in GENI. To do this we fed the GENI resource specification file (​https://raw.githubusercontent.com/GENI-NSF/geni-tutorials/master/OVSFloodLight/OVS_TPOLOGY_request_rspec.xml ,which can be found at the GENI Floodlight tutorial, into the GENI Web Portal, picked University of Texas as the site, and built the network depicted below.

With this network built, we were then able to SSH into the VM named switch and install the virtual switch:

We use the ovs commands to set up a bridge, shut down the interfaces that when to the host machines, and put interfaces onto the virtual bridge to run those connections. The details of this are all outlined in the GENI Floodlight tutorial.

To connect Faucet with our OVS switch at the University of Texas, we needed to retrieve the IP address and port of our Faucet instance running in SLATE. First, we needed to pull the instance ID from our Faucet application using:

This command outputs a detailed description our running Faucet application on SLATE, including the configuration information. The information we needed was present at the top of the output:

From this output, we could retrieve the IP of the application, 10.106.167.17, and the outward facing port on which Faucet was broadcasting: 31612. With these two pieces of information, we ran the following command on OVS swtich:

These commands tell the virtual switch where to go to get OpenFlow instructions on its Control Plane. These commands also tell the switch to not try to forward packets on its data plane without checking in with its controller. These two facts are important for validating Faucet’s functionality.

In order to validate Faucet’s control of the switch, we SSH to host-2 and try to ping host-3.

[NOTE: GENI added a slight extra layer of complexity because we have to specify the interface that connects to the switch. All GENI resources at a site also have an internal connection to each other. When we ping across the switch, Open Virtual Switch makes a request of the Faucet instance running on SLATE for instructions on how to handle the packets of that ping.]

In summary, we were able to succesfully configure and control switches at the University of Texas via GENI through a SLATE instance running at the University of Michigan. The use of SLATE made the configuration and installation of the Faucet controller straightforward and simple.

The SLATE Team
Edit This Page on GitHub